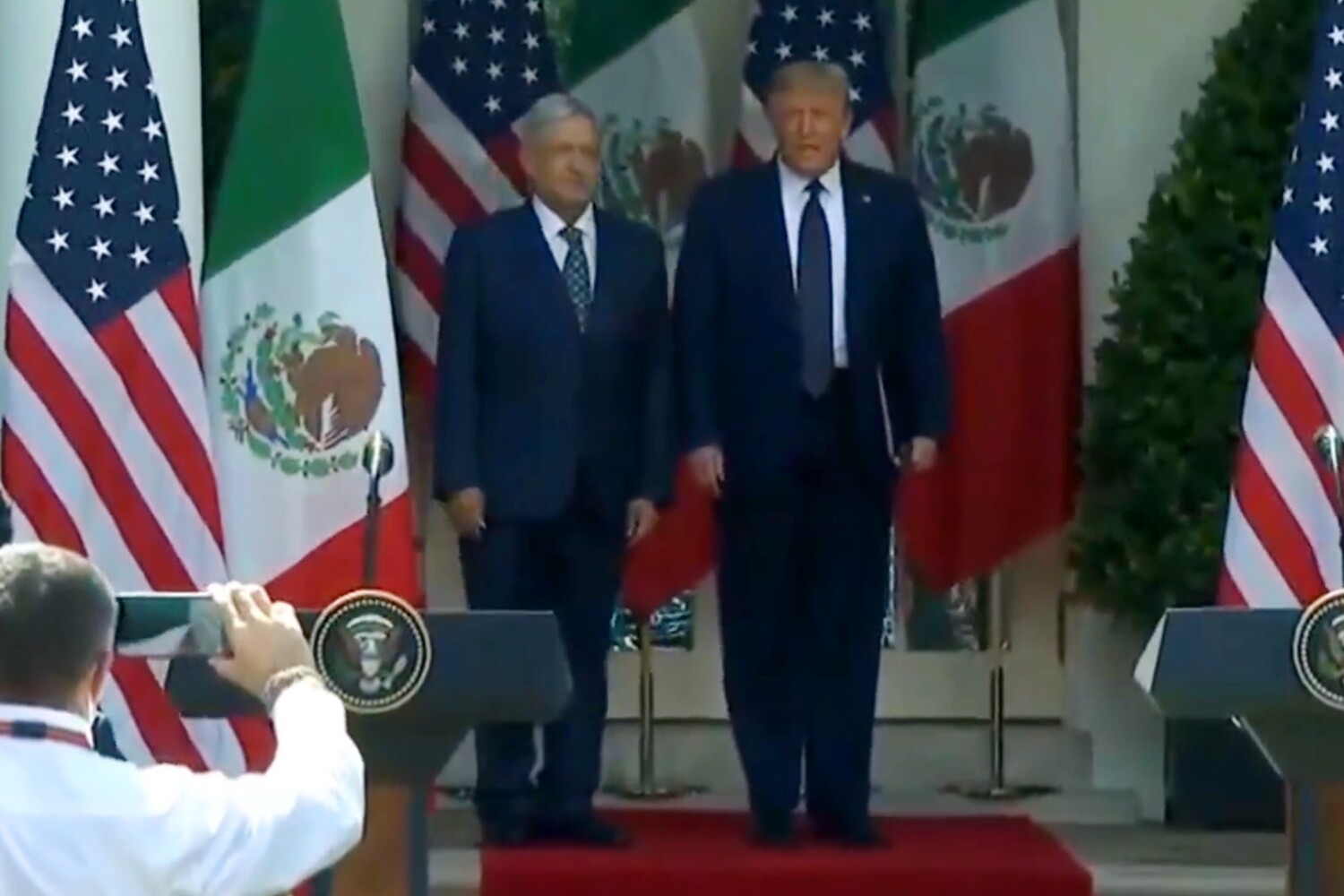 Mexico’s Andrés Manuel López Obrador once likened President Trump to Hitler. But on Wednesday, it was smiles, handshakes and praise as the two leaders held a day of meetings in the White House to celebrate a new trade agreement that both hope can salvage their respective economies, devastated by the COVID-19 pandemic.

Trump and López Obrador, unlikely allies who now call each other “friends,” came to the meeting as each is combating domestic political troubles over policies that have failed to slow the spread of the coronavirus.

López Obrador, a proud Mexican nationalist who favors leftist rhetoric, was heavily criticized for using his first trip abroad in 19 months as president to confer with Trump, whose right-wing broadsides often disparage Mexicans and whose policies are stubbornly anti-immigration.

Trump, who once warned of “dark invasions” from Mexico, on Wednesday lauded Mexicans as smart businesspeople who contribute to U.S. society and the economy. “The Mexican people are incredible,” Trump said, with López Obrador at his side.

López Obrador thanked Trump for respecting Mexican sovereignty by never attempting to impose demands, though Trump has repeatedly pressured the Mexican government to acquiesce to his restrictions on migration, even threatening to cut aid if López Obrador did not comply.

“We are not fighting, we are friends, and we will continue to be friends,” López Obrador said to Trump.

Trump, falling in polls ahead of the U.S. presidential election, appeared eager to mark a rare, concrete achievement — the trade agreement — while also showing he can still host the Mexican president despite his administration’s hard-line approach toward the southern neighbor.

“Trump can tout one of his few foreign policy achievements and claim that by renegotiating [the North American Free Trade Agreement], the U.S. ended up with a better deal,” said Michael Shifter, an expert on Latin America and president of the Washington-based Inter-American Dialogue. “He can also appear with a Mexican president, whose people and migrants Trump has relentlessly insulted but who has nonetheless been notably accommodating to the U.S. president on a range of issues.”

“The two are in a symbiotic relationship,” said Christopher Sabatini, senior fellow for Latin America at the London-based Chatham House.

The central theme, at Wednesday’s meetings and a working dinner, was to mark the trade treaty reached by the United States, Mexico and Canada that took effect July 1.

Trump’s economic advisor Larry Kudlow hailed the U.S.-Mexico-Canada Agreement, or USMCA, as a major job creator, especially in automobile and other manufacturing industries, that will boost economic recovery after the pandemic.

In fact, the agreement is an update of the 1994 NAFTA accord among the three countries. It adds labor and environmental protections, but experts predict it will have limited short-term impact on growth.

López Obrador had hoped that Canadian Prime Minister Justin Trudeau would also be at the White House this week as a form of political cover to what is a controversial trip both here and in Mexico. But Trudeau declined, citing a busy schedule and the inappropriateness of international travel amid the pandemic that continues to rage in the United States.

Like Trump, López Obrador has been scornful of the science behind the disease and downplayed the risks. The Mexican president says he has never been tested for COVID-19 because he has no symptoms, and would take a test only if the White House required it. It did. Neither López Obrador nor Trump wore a mask as they stood outside the Oval Office.

“For both presidents, this serves as a distraction from the crisis in their countries, which is COVID-19,” said Fernando Cutz, a former member of Trump’s National Security Council in charge of Latin America and now at the Wilson Center think tank and Cohen Group consulting firm.

“They’d be very happy to be able to shift the conversation to anything else as quickly as possible. Neither has been perceived as doing a particularly good job” in fighting the pandemic and its economic consequences, Cutz said.

López Obrador has cooperated with Trump’s immigration policies by agreeing to keep migrants and potential asylum seekers in Mexico to prevent them from reaching the United States. He has tempered some of Trump’s other tough ideas, deflecting threatened tariffs on Mexican products destined for U.S. markets and a possible restriction on Mexican exports of petroleum.

In addition to the White House appearances, López Obrador placed wreaths at the Lincoln Memorial and at a statue of Benito Juarez, the 19th century Mexican hero who fought for independence from the French and became the country’s first indigenous president. Noisy crowds of mostly supportive demonstrators accompanied the leader, chanting in Spanish, “Presidente! You are not alone!” There were small protests as well.

The White House dinner was to include Mexico’s telecom tycoon Carlos Slim, one of the world’s richest men. No meetings with Mexican American or immigrant groups, or U.S. lawmakers were scheduled.

López Obrador is ignoring strong opposition to his visit from both U.S. Democrats and many Mexicans. A dozen Latino members of Congress wrote Trump urging the meeting be canceled and calling it a political stunt.

According to Axios, Trump returned the letter with a note scrawled at the top, apparently with a black Sharpie, ignoring the plea and calling the Mexican president “my friend and a wonderful man.”

“I look forward to meeting with the president,” Trump wrote. “Will be good (+important) for both Mexico + the USA.”

López Obrador also praised his relationship with Trump, whom he had never met.

“Our adversaries say, ‘How can I go if Mexicans have been insulted?’” López Obrador told reporters before departing Mexico City. “I can say to the people of my country that since we have been in office, there has been a relationship of respect, not only toward the government, but especially toward the people of Mexico.”

Even as López Obrador spoke, however, Trump was tweeting photographs of a portion of the border wall between the U.S. and Mexico — much hated in Mexico — which he has vowed to expand.

And Trump is reportedly considering attempting again this week to kill the so-called Dreamers program, which protects from deportation hundreds of thousands of immigrants who, as children, were brought to the U.S. illegally by relatives.

The Supreme Court struck down Trump’s first attempt to rescind the Obama-era program, whose beneficiaries are largely Mexican-born, though most scarcely recall the country.

Some analysts worried that López Obrador’s fawning regard for Trump so close to a U.S. presidential election could undermine the bilateral U.S.-Mexico relationship, especially if former Vice President Joe Biden wins in November.

During the 2016 U.S. presidential campaign, when Trump repeatedly used Mexico as a punching bag, he traveled to Mexico City to meet with then-President Enrique Peña Nieto in an encounter widely seen as politically damaging to the Mexican leader.

Taking place at a time when few Democrats are in town — Congress is in recess — López Obrador’s visit could be seen as a highly partisan gesture, said Juan Gonzalez, a former senior advisor to Biden. But Gonzalez added that the bilateral relationship is too important and is unlikely to suffer long-term damage, especially in a Democratic-led administration.

Some economists saw more positive potential in the López Obrador visit, especially if it focuses on trade and how Mexico can replace China in supply chains.

Plus, it could allow López Obrador to reassure international investors jittery about his reputation as a leftist, said Juan Carlos Baker, a former deputy commerce secretary in the Mexican government, during in a Tuesday teleconference organized by the Washington-based Atlantic Council think tank.

“The reality is that regardless of the political context in both countries, the U.S. and Mexico cannot give themselves the luxury of not speaking to each other,” he said. “The axis of the visit must center around economic issues and the possibility for recovery.”