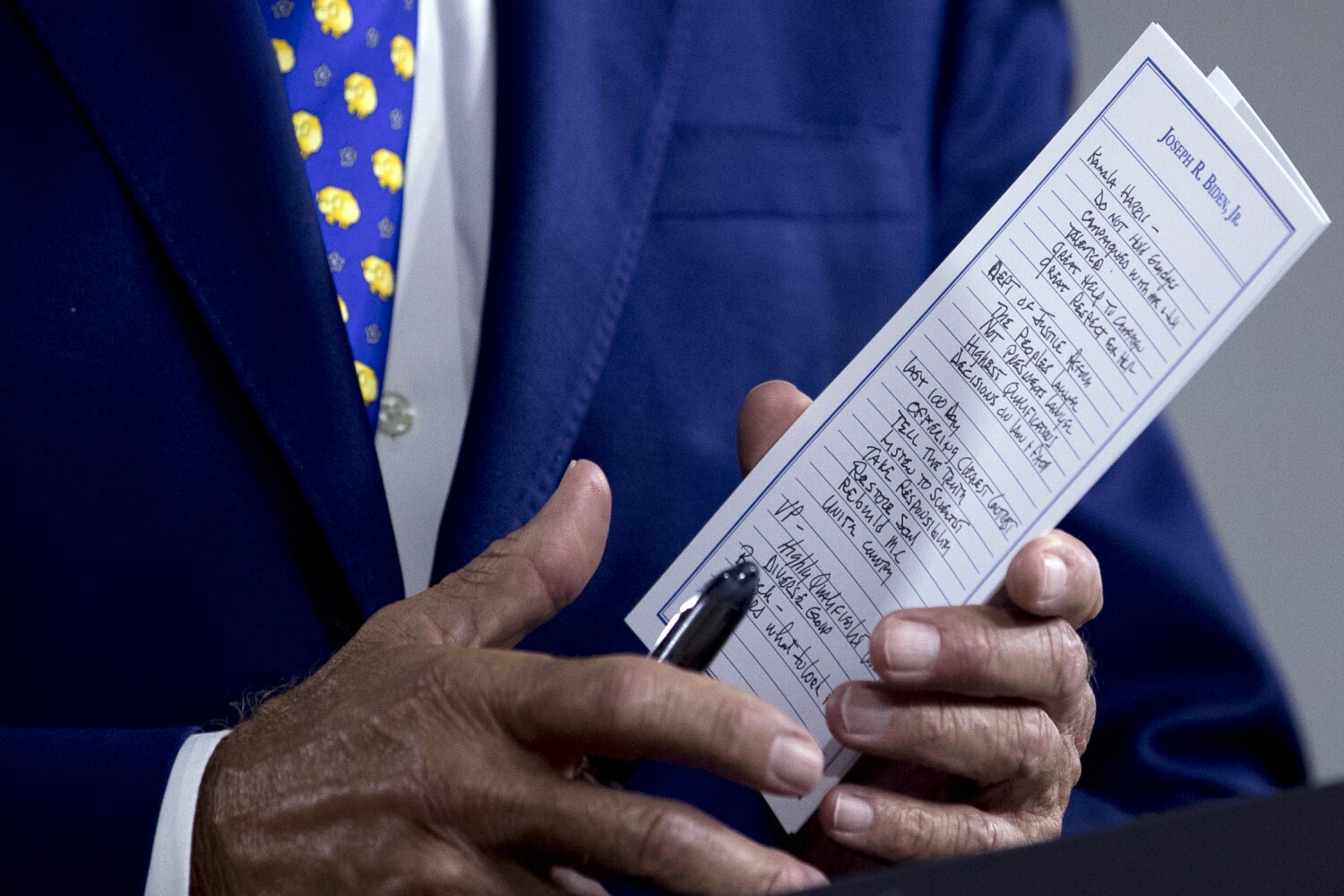 With all that’s haywire in the world, it’s comforting to have a good old American roadshow this summer. Its awesomely cornball name is “The Veepstakes.” Drumroll.

Sometime very, very, very soon, Democratic presidential candidate Joe Biden will join forces with a running mate, and his campaign signs will get a refresh: Biden-Harris or Biden-Rice or maybe Biden-Bass or Biden-Abrams. Who will it be?

The rhythm of this cartoonish cotillion is familiar, even if this is the first time a male candidate has pledged, as Biden did on March 16, to pick a woman to ride in the sidecar. Whatever the virtues of that pledge, it has generated some odd optics.

I’m not saying it’s exactly “The Bachelor: Campaign Trail,” but it’s a little weird to watch an old man set out to choose a younger woman to take to the ultimate fantasy suite, the White House.

If she’ll have him. Because the candidates for Biden’s final rose seem to have the upper hand here. The presumed top three, after all, are at the height of their powers: Sen. Kamala Harris (D-Calif.); Susan Rice, a former United Nations ambassador and Obama advisor; and Rep. Karen Bass (D-Los Angeles). These women, with all the world before them, seem to regard the VP role with clear-eyed skepticism, a slightly arched brow. As they should.

This year, the vice presidency — never a plum job — will be especially bruising. Whoever runs with Biden is in for an oppo inferno. She’ll be relentlessly trolled as a deep-state dragon by the Trump campaign and all those under-bridge internet dwellers who support it. There will be presidential tweets with playground taunts. Chants in the lock-her-up style. Death threats.

“Every woman in public life needs to develop skin as tough as rhinoceros hide,” wrote Eleanor Roosevelt. Biden’s running mate will have to have a thicker hide still. Come to think of it, an actual dragon, if the deep state has one on hand, might be worth considering.

And then there’s the fact that once won, the VP position will be a high-wire act in windy weather. If Biden is elected, he’ll be 78 at his inauguration — the oldest president in history. As someone who knows the second-in-command role well, Biden has expressed an uncommon willingness to delegate to his VP and to his Cabinet. According to Politico, he has also told aides he will not seek a second term. In other words, Biden’s VP will have to be an unusually active understudy, shadowing the boss in a paradoxically bright spotlight.

It’s a tall order. In past years people might have disdained the VP role because it’s not enough power; this time, for women in the prime of their careers, it might mean too much ascribed power for too little actual authority.

In any case, the so-called shortlist is an extraordinary group, but so are the “and Peggys.” That’s a reference to the Schuyler sisters competing for young Alexander’s attention in “Hamilton” — yes, I’m trying to make up for disparaging this solemn affair as “The Bachelor.” Peggy Schuyler is the one who vanishes from the action. Biden’s “and Peggys” include the likes of Massachusetts Sen. Elizabeth Warren and former First Lady Michelle Obama, among others.

No men. At all. It’s possible Biden could reverse his March pledge, but it would be a huge failure if he did. (Joe-Kanye is, blessedly, not going to happen.)

All of the shortlisters are Black. That wasn’t in the pledge (Biden did say he’d nominate a Black woman to the Supreme Court if he had the chance as president).

In April, Rep. James Clyburn (D-S.C.) said, “I’m among those who feel that it would be great for him to select a woman of color. But that is not a must.” Maybe not, but as Clyburn’s support in South Carolina was instrumental in scoring Biden the nomination, Biden would be wise to do whatever Clyburn — and so many others — thinks would be great.

The woman pledge and the POC possibilities have utterly reset the usual vice presidential “balance” issues. It used to be that pundits evaluated prospective running mates based on how well they could “deliver” their home states, part of a “geographic strategy” for victory.

Turns out that was all blather. According to a 2016 analysis of a century’s worth of election and voter data, a vice presidential candidate’s home state has almost no effect on how well the ticket performs there. A choice that used to hinge on farm states and urban constituencies has shifted irrevocably. Now it’s hard to imagine that the Democrats, anyway, will ever nominate a one-race, one-gender ticket again.

Happily, the suspense is not exactly killing us. In fact, “The Veepstakes” is a wholesome diversion from what is wiping us out. Distinct from the summer’s anguish, Biden’s search for a running mate — no matter who on the list he chooses — is destined to have a happy ending. When you expand your talent pool, you get better people.