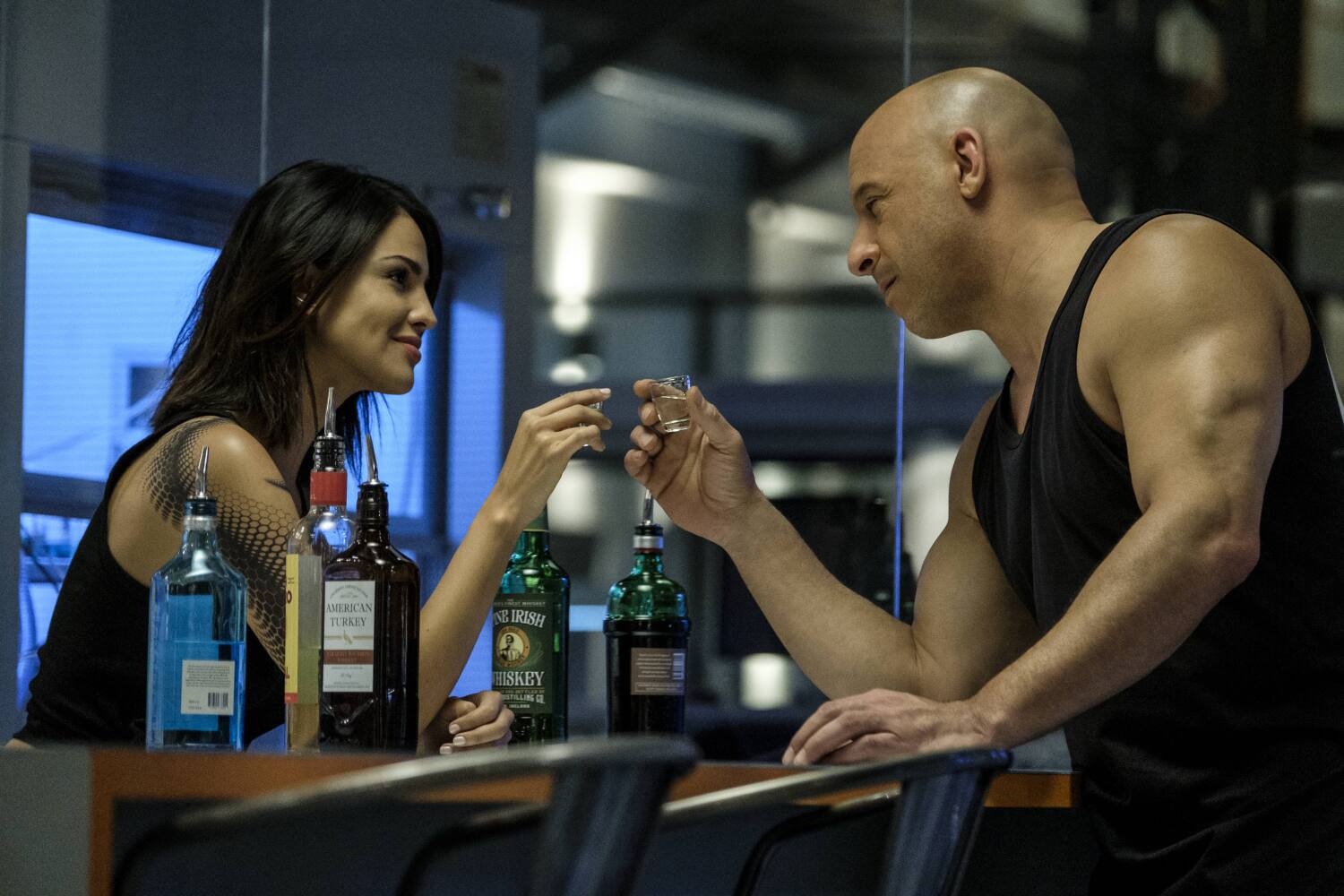 After a half year of uncertainty caused by the COVID-19 crisis, China’s beleaguered movie theaters reopened last week with films that ranged from local patriotic blockbuster “Wolf Warrior 2″ to Pixar’s “Coco.” For Hollywood, the return of the film industry’s most important foreign market was cause for cautious optimism.

“Where it leads, I don’t think anyone knows,” said Scott Einbinder, a Los Angeles producer and president of ANA Media, which consults for Chinese companies. “But it’s a relief that there’s been some light forming at the end of the tunnel after such a long period of darkness.”

Still, any sense of reassurance is clouded by a growing chorus criticizing Hollywood’s relationship with China. Trump administration officials and political allies have repeatedly hit the entertainment industry for its efforts to gain access to the lucrative Chinese market by appeasing the government in Beijing.

Secretary of State Mike Pompeo swiped at Hollywood on Thursday at the Richard Nixon Presidential Library and Museum in Yorba Linda, saying the industry “self-censors even the most mildly unfavorable reference to China.” This came a day after the State Department ordered the closure of the Chinese consulate in Houston over spying accusations. The Pompeo statement echoed a July 16 speech by Atty. Gen. William Barr, calling out studios for backing social justice causes stateside while censoring its movies for China despite its human rights violations.

“This censorship infects not only versions of movies that are released in China but also many that are shown in American theaters to American audiences,” Barr said.

The barrage has extended beyond movies. Earlier this month, Sen. Josh Hawley (R-Mo.) critiqued the National Basketball Assn. for “kowtowing to Beijing” while allowing athletes to wear social justice slogans on jerseys. In a letter to NBA Commissioner Adam Silver, Hawley asked whether players would also be allowed to don slogans supporting Hong Kong protesters, the U.S. military, or police. Adrian Wojnarowski, a journalist for Walt Disney Co.’s ESPN, was suspended after he sent a two-word email response, which included the f-bomb.

Additionally, White House trade advisor Peter Navarro called former Disney streaming chief Kevin Mayer an “American puppet” after the executive left the Burbank entertainment giant to run social media app TikTok, which is owned by Chinese company ByteDance. Navarro has accused TikTok and other apps of funneling user data to Beijing. “We have never shared TikTok user data with the Chinese government and would not do so if asked,” a TikTok spokeswoman said.

The wave of criticism comes at a time when the entertainment industry is already facing uncertainty in China, which has seen massive growth in its film business in the last decade. Since a landmark 2012 agreement that dramatically increased U.S. companies’ access to China’s cinemas, studios have wanted to expand their business there.

Studios have long sought a greater box office share in China than the 25% of sales they receive now, compared with about 50% in other nations, as well as better release dates. They’ve also wanted to boost the number of foreign films allowed into the country annually under the revenue-sharing deal from the current quota, loosely set at 34.

Those efforts took a back seat amid the Trump administration’s trade war with China. Relations between the U.S. and China have been further strained by the latter country’s provocative moves to expand its military influence in the South China Sea.

Some studio executives and analysts worry that escalating rhetoric could further limit prospects for American movies, particularly for independent studios that get their films into the country through a flat-fee system. Film companies are already struggling at home because of the effects of the coronavirus situation on productions and theaters.

“The conversation needs to be focused on gaining legal access to the Chinese market rather than trying to tie producers’ hands in their efforts to surmount the trade barrier,” said Jean Prewitt, president of the Independent Film & Television Alliance.

Censorship is a price of doing business in China, where foreign films endure a rigorous approval process before they’re released.

In 20th Century Fox’s 2018 hit “Bohemian Rhapsody,” references to Queen front man Freddie Mercury’s sexuality were cut from the version that screened in China. Last summer, a Twitter user noticed that Tom Cruise’s bomber jacket in a trailer for “Top Gun: Maverick” was altered to remove patches representing the flags of Japan and Taiwan, which was interpreted as a move to appease China. Barr’s speech cited Marvel’s 2016 blockbuster “Doctor Strange,” which changed the origin of the character The Ancient One from a Tibetan monk to a Celtic mystic, played by Tilda Swinton.

Representatives for Disney, Warner Bros., Sony Pictures, Paramount, Universal Pictures and the Motion Picture Assn. declined to comment for this story or did not respond to requests for comment.

However, industry analysts and executives said the left-leaning entertainment industry is a convenient punching bag for politicians. That tendency has only increased during an election year when the administration is vulnerable because of its handling of the coronavirus crisis, which Trump has referred to as the “China virus.” Sen. Ted Cruz (R-Texas) this year introduced legislation that would prevent studios from receiving government assistance on productions if they censored films for China, a move that studio executives have shrugged off as political posturing.

“It gets headlines and publicity and feeds into the narrative that all of our problems come from the outside or from left-wing radicals,” said Stanley Rosen, a political science professor and China expert at the University of Southern California.

Kirk D’Amico, president of Los Angeles-based distributor Myriad Pictures, said his business of licensing content to China had been steadily increasing before the trade disputes took hold. Now he says his China sales fell 70% to 80% since 2018. He blames trade tensions and rhetoric over COVID-19.

Some film industry executives, who spoke on condition of anonymity, said Washington’s concern over censorship is overblown, noting that studios trim movies for many countries, including conservative Middle Eastern nations, to avoid offending local sensibilities. Altering movies to appeal to audiences in the world’s most populous nation makes business sense.

“We’re not compromising values,” said one film business insider, who was not authorized to comment.

But some critics argue that China’s influence has become so great that its preferences affect what kinds of stories are told globally, not just in mainland China.

“The Chinese government is not unique in terms of pushing Hollywood to censor or make movies that reflect their own narratives, but it’s the only one that is able to be this effective to a global extent,” said James Tager, deputy director of free expression research and policy at PEN America, which is publishing a report on the subject.

Censorship has tightened in China since the regulatory body that traditionally oversaw its entertainment sector was eliminated in 2018, shifting control to the Communist Party’s propaganda department. The move was part of a sweeping campaign under Party Chairman Xi Jinping to tighten control over speech and thought in China, particularly in media and education.

While some recent American pictures have done huge business in China, the government there has lately tended to favor local productions and patriotic films. China has produced an increasing number of patriotic movies following the Party’s guidance to implement “socialist core values” and build “Chinese spirit, Chinese values, Chinese power” under the “important guiding spirit of General Secretary Xi Jinping,” as Central Propaganda Department director Huang Kunming declared at a Chinese movie awards ceremony last year. That has made the market more challenging for American movies.

Entertainment industry veteran Chris Fenton, author of the upcoming book “Feeding the Dragon,” about the relationship between U.S. studios and China, said studios should be more careful about how they respond to Chinese restrictions.

“Studios need to admit that there is a lot of hypocrisy going on,” Fenton said. “They need to get out of their bubble and realize that a lot of their constituents are becoming very aware of the issues in China.”

Most observers don’t expect China to immediately retaliate against the major studios over administration officials’ statements. Foreign movies including Universal’s Robert Downey Jr. family film “Dolittle” and Sony’s Vin Diesel action movie “Bloodshot” were recently approved for release in the country. It remains unclear when Disney will be able to release its live-action “Mulan” remake there, despite the inclusion of Chinese cultural consultants during the $200-million production.

China still needs big Hollywood movies to fuel the recovery of its massive cinema industry, which has been shuttered since late January. “Ultimately, having Hollywood releases in China is as beneficial to China as it is to Hollywood,” said Eric Wold, an entertainment industry analyst at B. Riley FBR.

“It’s easy for the Trump administration to pick on Hollywood,” he said. “But it’s much more complicated than that. They have to remember, also, that Hollywood creates a lot of jobs around the country.”