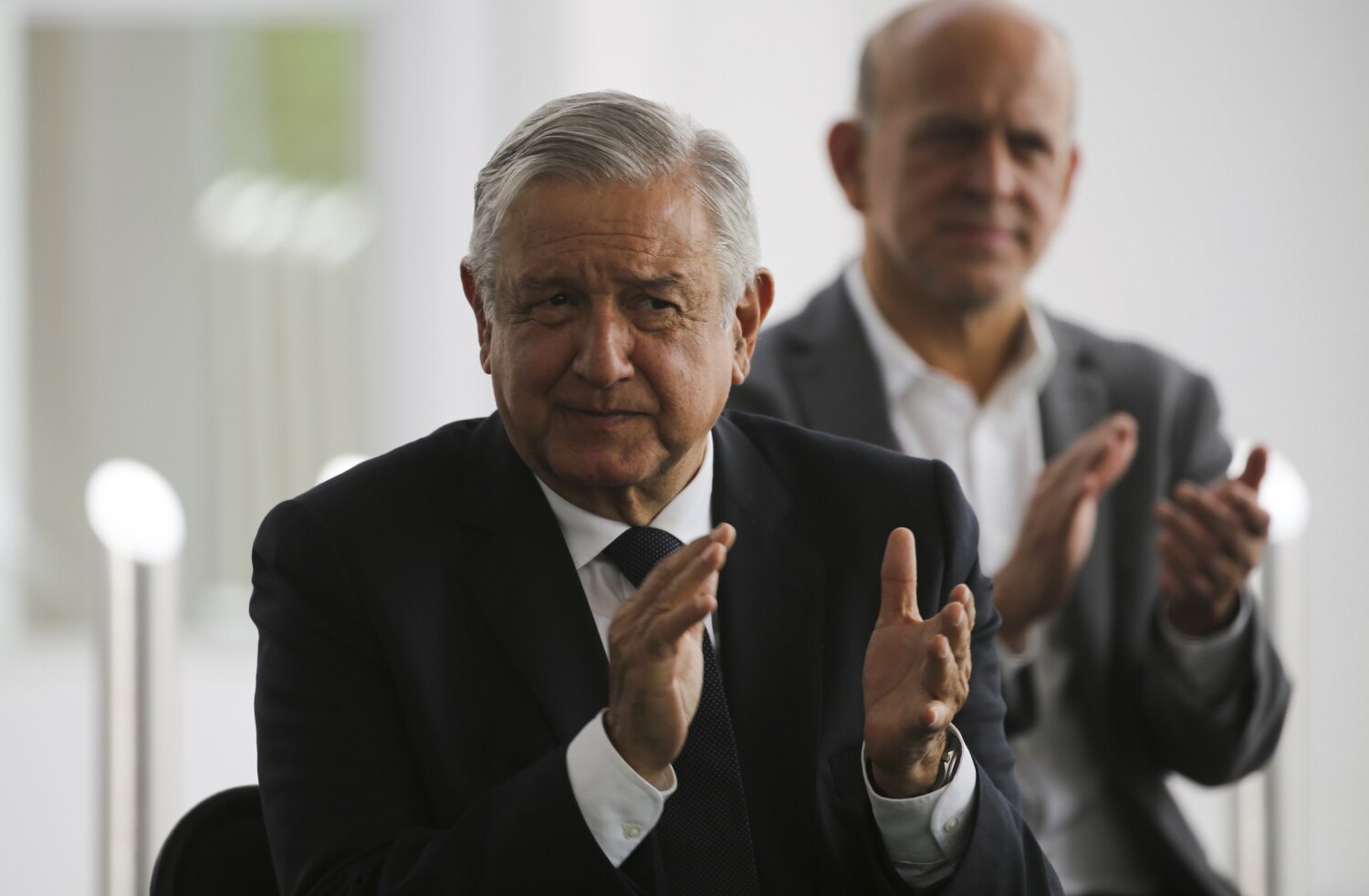 Donald Trump notoriously kicked off his presidential bid in 2015 by disparaging Mexican immigrants as drug dealers, criminals and “rapists,” adding: “And some, I assume, are good people.”

The two chief executives are scheduled to meet in person for the first time this week in Washington. For López Obrador, it will be his initial foreign trip as head of state since assuming the Mexican presidency in December 2018.

Much has changed since the two populists of contrasting political pedigrees — López Obrador is a long-time leftist and career politician, Trump a conservative Republican real estate mogul — tossed rhetorical Molotov cocktails during their respective campaigns.

The two presidents now regularly laud each other as “friends,” and their governments have collaborated closely on diverse thorny issues, including immigration, cross-border crime and bilateral trade. Their cordial but long-distance dealings to date have contradicted pundits’ expectations that López Obrador’s ascension would signal a more polarized era in U.S.-Mexico relations.

The stated purpose of this week’s visit is to mark the July 1 launch of the new United States-Mexico-Canada Agreement, which replaces the more than quarter-century-old North American Free Trade Agreement (NAFTA) that Trump labels a “job killing failure.” Trump has argued that NAFTA sent well-paying U.S. employment to low-wage factories in Mexico while critics say the new deal is basically a rebranded NAFTA that won’t return those jobs to U.S. soil.

But the planned trip — initiated by the White House in the midst of Trump’s reelection campaign — has ignited fierce controversy on both sides of the border. Trump’s incendiary language and style have transformed what might normally be a routine confab between neighboring heads of state into a raging political firestorm.

For weeks, political observers here have urged the Mexican president to reject the invitation, viewing it as a stunt designed to help salvage Trump’s flagging reelection effort, especially among U.S. Latino voters.

“There is no argument to deny that a visit by the Mexican president at this moment … implies an act of intervention that, albeit indirectly, will end up benefiting the campaign of Donald Trump,” wrote columnist Ricardo Raphael in Mexico’s Proceso news weekly.

“If Biden wins the presidency, his antagonism towards Mexico will be evident in the bilateral policies that he adopts,” argued Bernardo Sepulveda, former Mexican ambassador to Washington and ex-foreign secretary, in an open letter published in La Jornada newspaper.

In the United States, Democratic lawmakers and party loyalists have denounced the trip as a Trump “photo op,” in the words of Tom Perez, who chairs the Democratic National Committee.

In a video message posted on Twitter, Perez suggested that the Mexican president ask his U.S. counterpart: “Does he still think Mexicans are rapists and murderers?”

Officials here label the visit as an agenda-packed work trip unrelated to U.S. politics, largely designed to improve trade and address other mutual concerns. While López Obrador has received many invitations in Washington, Mexican authorities have not detailed any plan for him to meet with Democratic lawmakers or representatives of the Mexican immigrant community.

In a July 4 message to the people of the United States and Mexico, López Obrador — who on the campaign trail was a free-trade skeptic — lauded the revised trade pact as “a great accord” that “will allow for the reactivation of the economy of our country, and generate jobs, and create well-being for our people.”

Canadian Prime Minister Justin Trudeau has yet to commit to a Washington summit, expressing concerns about possible U.S. tariffs on Canadian aluminum. Mexican authorities say they are hopeful the Canadian leader will attend, in part to dilute attention from the Trump-López Obrador connection.

Looming over the visit is the specter of Trump’s campaign stop in Mexico to meet with López Obrador’s predecessor, ex-President Enrique Peña Nieto. That 2016 episode is widely viewed here as a catastrophic political blunder that shredded the ruling party’s electoral standing and helped propel challenger López Obrador into a landslide electoral victory. López Obrador was himself a harsh critic of the Trump visit.

“At the time,” noted columnist Raphael in Proceso, “the magnate [Trump] was a Republican candidate who had constructed his popularity by demonizing Mexico and Mexicans.”

The U.S.-Mexico relationship has long been a fraught one for Mexican leaders. They must straddle a sometimes fine line between cooperation and not appearing submissive to a neighboring superpower that in the distant past invaded and seized Mexican territory, and more recently has provided an economic “escape valve” for millions of impoverished Mexicans — whose remittances back home have helped prop up the country’s economy.

López Obrador does not appear to have pushed for a personal meeting with Trump, who remains a lightning rod for criticism in Mexico. The Mexican president may be a reluctant visitor to Washington, but analysts say turning down a request to celebrate a pact that Trump calls a major foreign policy accomplishment could potentially have risked offending the president, something that López Obrador has gone all-out to avoid.

Throughout his tenure in office, the Mexican president has had to fend off allegations of being overly acquiescent to Trump, especially on the provocative issue of immigration. He has studiously sidestepped confrontation with the White House, and hosted Ivanka Trump at his inauguration, while meeting with Jared Kushner, Trump’s son-in-law, in Mexico City. Last month, Trump said López Obrador was “really a great guy.”

López Obrador, 66, took office vowing to help multitudes of Central American immigrants and other non-Mexicans who routinely traverse Mexican territory en route to the United States. But those promises were quickly tempered as Trump threatened potentially ruinous tariffs on Mexican imports to the United States, long a key engine of the Mexican economy, if Mexico did not move to halt U.S.-bound immigration.

López Obrador often says that the “best foreign policy” is based on sound domestic leadership. While his predecessor, Peña Nieto, made more than a dozen foreign trips during his first year in office, López Obrador has insisted that he was too busy with his pledged “transformation” of Mexico to travel abroad.

Still, he has called Mexico’s relationship with the United States “fundamental,” citing the two nations’ brisk trade, cultural links and the presence of millions of Mexicans in the United States.

López Obrador heads north at a difficult juncture: At home, he is dealing with multiple crises — a cratering, coronavirus-ravaged economy; an ever-increasing curve of coronavirus cases and related deaths; and an escalating series of gang-related attacks, including the execution-style killings of 26 young men last week at a drug-rehab center, and the brazen attempted assassination of the capital’s security chief.

His popularity is down from 80% highs, but López Obrador still maintains a respectable 56% approval rating some 19 months into his six-year term, according to a recent poll from El Financiero newspaper. His frugal lifestyle, denunciations of corruption and folksy manner help maintain his popularity among many Mexicans, despite the country’s struggles.

In a signature austerity move, the Mexican president has tried to sell off the plush presidential jet — calling it “haunted” — and always travels on commercial airlines, a practice he says he plans to follow when departing Tuesday for Washington.

Since news of the trip surfaced, López Obrador has denied allegations that he is succumbing to U.S. demands that he come to Washington and demonstrate obeisance to Trump at an especially inopportune moment.

“I have no problems of conscience going to the United States because … I have always maintained that Mexico is a free, independent and sovereign country,” López Obrador said in late June. “I want to state clearly: I am not selling out my country.”