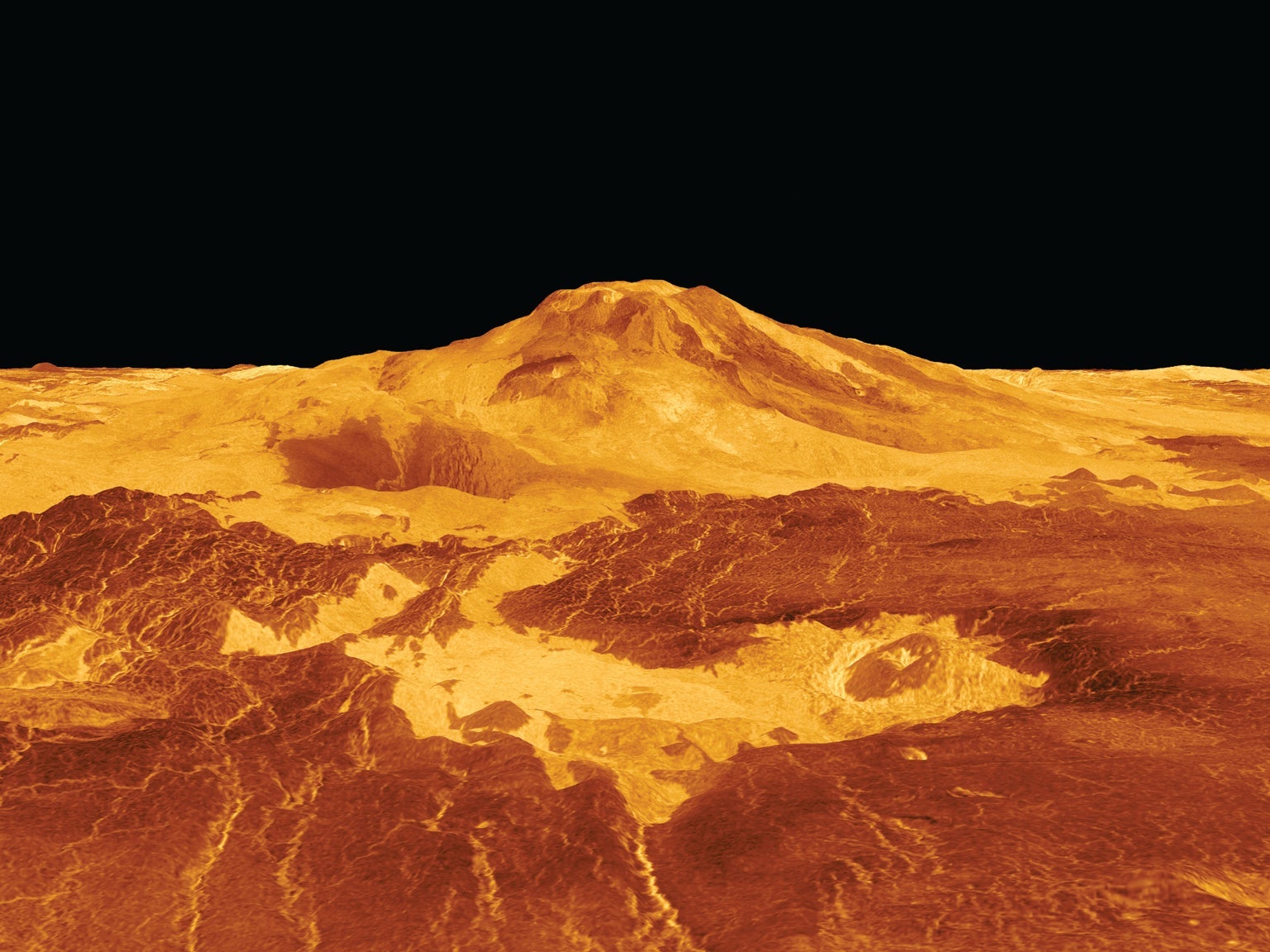 Below Venus’s toxic clouds of sulfuric acid is an apocalyptic world, with temperatures hot enough to melt lead and pressures that could crush heavy machinery. But it might not always have been so.

In 2016 Michael Way of NASA’s Goddard Institute for Space Studies and his colleagues applied the first three-dimensional climate model to early Venus. They found it could once have been so temperate that liquid water pooled in vast oceans—the key to life as we know it. Now Way and Anthony Del Genio, also at Goddard, have developed a framework for the planet’s evolution based on more complex data that incorporates various topographies and different amounts of sunlight. Their study, published in May in the Journal of Geophysical Research: Planets, puts forward a new explanation for how Venus could have remained habitable for nearly three billion years before morphing into today’s blistering hellscape.

Many scientists have postulated that Venus was bone-dry from the beginning and never hosted liquid water. Roughly 4.5 billion years ago, when the solar system formed, the second planet from the sun would have received enough sunlight that any atmospheric water was lost to space—and the radiation would have thwarted the formation of life as it exists on Earth. “There would have been nothing,” Way says, without some mitigating factor. That factor, he and Del Genio argue, could have been a supersized cloud that developed early in the planet’s evolution and cooled the world.

Unlike Earth, Venus does not rotate once on its axis every 24 hours but instead does so once every 243 Earth days. Given that it orbits the sun on a similar timescale (once every 225 Earth days), one side of the planet typically basks in sunlight, while the other faces a lengthy darkness. A thick atmosphere could easily circulate heat from the dayside to the nightside, keeping Venus hot. But in Way and Del Genio’s model, a giant cloud on the dayside would act as a bright shield to reflect incoming sunlight and allow temperatures cool enough for liquid water.

Many researchers have already considered the idea that Venus was once habitable, but the new model further shows how the planet could have transformed into today’s hothouse—and it tosses conventional wisdom aside. “There’s a story about Venus that we tell ourselves. We teach it in introductory astronomy classes, and we write about it in books,” says David Grinspoon, an astrobiologist at the Planetary Science Institute, who was not involved in the study, although he was a co-author on the 2016 paper. “And it turns out that story is wrong.” The idea is that the sun slowly increased in brightness, causing the planet to grow so warm that it could no longer maintain a stable ocean. In other words, it pushed the inner edge of the so-called habitable zone—the orbital region where liquid water can create conditions conducive to life—past the solar system’s second planet. But Way and Del Genio’s model suggests cloud cover would have provided enough shade to keep liquid water on the surface of Venus even until today—had something not tipped the planet into its current state.

The authors propose a violent mechanism best understood by looking at the young Earth. Roughly 250 million years ago deep gashes opened in Earth’s crust, pouring lava onto the surface and spewing enough carbon dioxide into the atmosphere to kill 96 percent of marine species and 70 percent of terrestrial species in the largest mass extinction in history. These volcanic events, which leave deposits called large igneous provinces, produce at least 100,000 cubic kilometers of lava over one million years. “We’re talking about an affront to God in terms of the amount of lava that comes out per unit time,” says Paul Byrne, a planetary geologist at North Carolina State University, who was not involved in the study.

Although these eruptions have rocked Earth on several occasions, often resulting in mass extinctions, multiple events have never happened at once. “That’s fortunate for life on Earth,” Way says, but scientists see no reason why more than one event could not happen simultaneously. And if such multiple events did occur on Venus, they would have dumped enough carbon dioxide into the atmosphere to drive the planet into an apocalyptic greenhouse state, researchers say.

The hypothesis is attractive: “There’s something romantically tragic about a world so like our own that was killed,” Byrne says. “I want so much for it to be true that one day we’ll touch down and find fossils from a shallow sea of a Venusian ecosystem.” He notes, however, that there is no direct evidence to support this notion.

The authors argue that large-scale volcanism would have continued to pave much of the planet in volcanic rock, a state visible today. But Vicki Hansen, a geologist at the University of Minnesota Duluth, who was not involved in the study, says measurements from the Magellan spacecraft, which orbited Venus in the early 1990s, do not support a resurfacing from one catastrophic event: “If you look at the data, it flies in the face of all that,” she says. According to her team’s analysis, “We can identify three distinct eras in the evolution of Venus; if you have catastrophic resurfacing, that doesn’t work, because [it] would wipe out all earlier histories.”

There is no question that the issue is contentious. Indeed, a number of scientists still argue that Venus was never fit for life.

To find out, researchers will need to peer more closely at our neighbor. “We could do models until the cows come home; that doesn’t make anything right,” Hansen says. “We have to test what the results of those models are.”

Byrne says we should send a fleet of spacecraft to Venus, including orbiters, landers, balloons, aerial platforms and even blimps. The planet’s atmosphere holds clues about how much water has been lost, and the surface could reveal whether and when volcanic eruptions punctured it. Future missions could help settle the debate about whether or not Venus was ever hospitable to life and could push astronomers to expand their search for livable planets across the galaxy.

“If this scenario is correct, it says Venus-like planets actually have the potential for life, so we shouldn’t ignore them,” says Adrian Lenardic, a geophysicist at Rice University, who was also not involved in the research. “We should look there.”