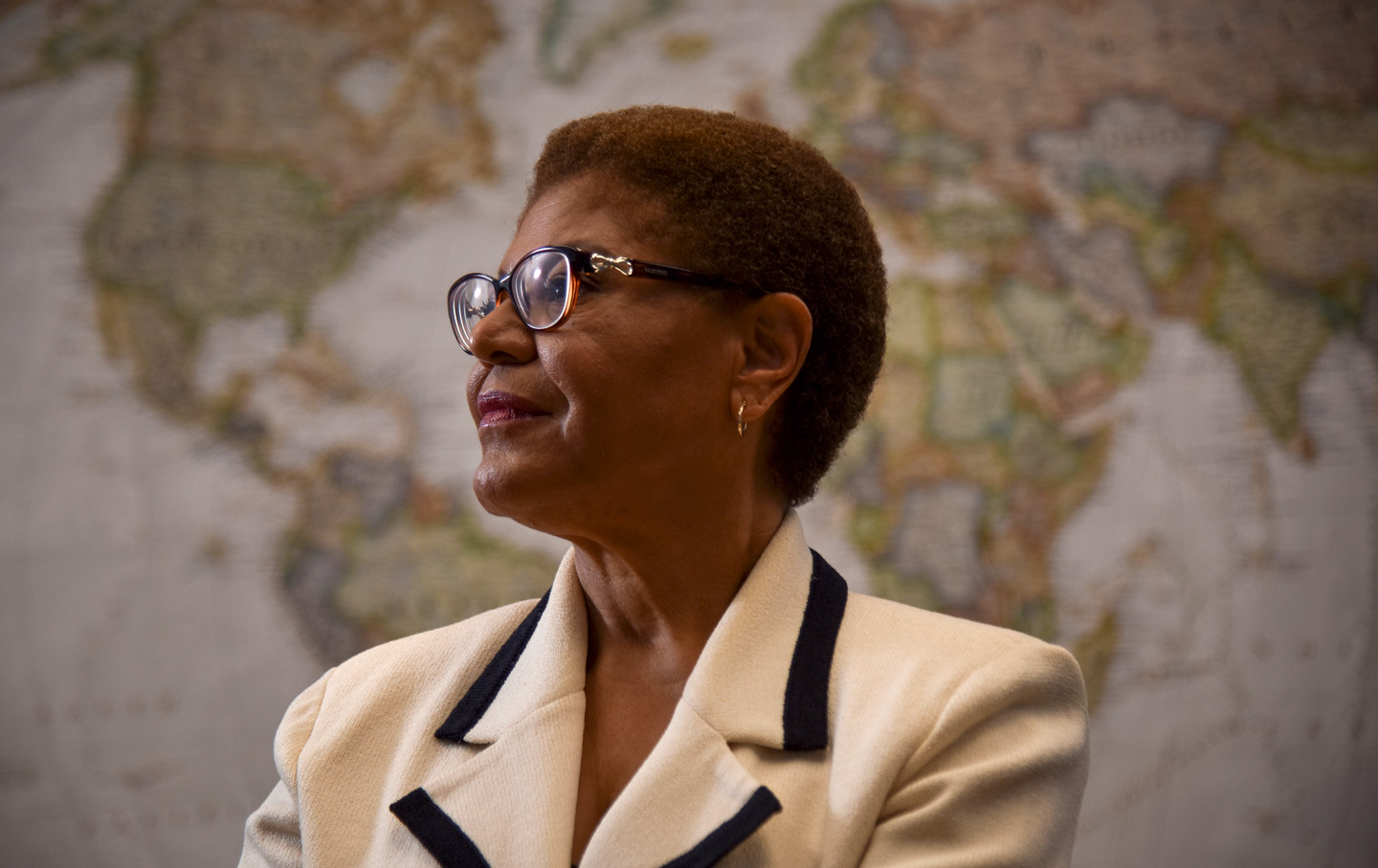 Representative Karen Bass, the chair of the Congressional Black Caucus, in her office at the Rayburn House Office Building (Jahi Chikwendiu / The Washington Post via Getty Images)

More than 300 progressive Democratic National Convention delegates from more than three dozen states are signaling to presumptive Democratic presidential nominee Joe Biden that they want him to choose congressional Black Caucus (CBC) chair Karen Bass as his running mate. “We, delegates to the DNC for Joe Biden, Bernie Sanders, and others, believe Congresswoman Karen Bass is the best choice among Vice Presidential candidates under consideration to help unify our party and move our nation forward,” reads the statement that was circulated Friday. “We urge Vice President Biden to choose her to join the ticket.”

Bass, a veteran activist and former speaker of the California State Assembly who has represented that state in the House of Representatives since 2011, has emerged in the late stages of the vetting process as a serious contender for a place on Biden’s ticket. Since then, the Californian has been the target of whisper campaigns, opposition research dumps, and media hits that seek to portray her as too radical or controversial for a place on the ticket. But the delegates say Bass is precisely the right candidate for a party that needs to build out its base of support.

“Karen Bass is a builder—of multiethnic and multigenerational coalitions which stand the test of time,” says Dolores Huerta, the cofounder of the National Farmworkers Association, which later became the United Farm Workers. “In these chaotic times, Joe Biden needs a tested and proven partner who can help him unite the country and bridge the divides others have sought to deepen.”

Huerta backed California Senator Kamala Harris, another VP prospect, for the party’s presidential nomination. But the veteran civil rights and economic justice activist has been talking up Bass in recent weeks, noting that the CBC chair has a long record of working on the domestic health care, jobs, and justice issues where Biden will need a strong partner. “Karen has never been a self-promoter, so probably a lot of people don’t know who she is,” she explained in a recent interview with Payday Report, “but people in my world, the activist world, we know who Karen Bass is.”

As the convention approaches and Biden closes in on a choice, there have been reports that Harris, a former prosecutor, and another candidate favored by centrists and foreign policy insiders, former Obama administration national security adviser Susan Rice, have emerged as frontrunners. But Bass, who recently led the successful House push for the “George Floyd Justice in Policing Act,” remains in contention—at least in part because of a sense that adding her to the ticket would excite supporters of Sanders and economic and social and racial justice activists.

Former Ohio state senator Nina Turner, a cochair of the Sanders campaign whose name has been raised by the Vermont senator’s backers as a vice-presidential prospect, signed the pro-Bass statement. “Congresswoman Bass would make an excellent Vice President,” says Turner. “Her commitment to the grassroots is evident in her work from activist to the California legislature to the Congress. She has a record of building coalitions especially during turbulent times and this skill set is absolutely needed in this critical moment in our nation’s history. Moreover, she brings a strong progressive voice to the table that speaks to the future of America.”

While enthusiasm for Bass has grown among progressives, the congresswoman has taken explicit hits from Republicans and subtler jabs from centrist Democrats. Media reports have tried to make a big deal about a speech she gave, as a state elected official, at the opening of Church of Scientology’s headquarters in Los Angeles—leading Bass to point out that she continues to “proudly worship at First New Christian Fellowship Baptist Church in South LA.” But the biggest hits have involved old-school red-baiting—with frequent references to the fact that Bass worked with the Venceremos Brigades that traveled to Cuba in the 1970s to help construct homes and medical facilities. She’s also been criticized for adding a brief reflection on Oneil Marion Cannon, a longtime LA activist who was active in the Communist Party, to the Congressional Record after Cannon’s death.

“Republicans have seized on an opportunity to paint Bass as a Castro supporter, and a communist, in particular to Cuban Americans in swing states like Florida,” notes The Guardian, which adds, “Bass argues her position on Cuba ‘is really no different than the position of the Obama administration.’ She accompanied Obama in 2016 on his historic visit to the country. Bass has also stressed that she is not a communist, but said she appreciated Cannon’s work for his community in Los Angeles and his commitment to campaigning for Black and brown candidates.”

The Castro hit is a sly jab at Bass, as Democratic strategists always fret about how to appeal to Cuban-American voters in the closely-contested state of Florida. But the list of delegates calling on Biden to choose Bass includes Floridians, including Jessica Lauren Hernandez, a Cuban-American Sanders delegate, who says, “I think that for Cuban-American families like mine, the fact that she actually cares about the people of Cuba and wants a better relationship with the country can help Biden win here. As someone that has family in Cuba, I want an American government that will actually care to improve the relations between the countries.”

“Young people and progressives in Florida like me would be fired up to have Karen Bass on the ticket. Karen Bass is someone that is receptive and would deeply care about my community,” says Hernandez. That’s a point Kai Newkirk, a Sanders delegate from Arizona who helped organize the pro-Bass statement, says Biden and others in the party need to recognize. “No other VP candidate has Bass’s breadth of support,” says Newkirk. “Joe Biden and all who want to unify the party should take that to heart.”

The co-chair of the California delegation, which is the largest that will participate in this month’s convention, is Representative Ro Khanna, a Sanders backer who early in the vetting process spoke up for another former presidential candidate, Massachusetts Senator Elizabeth Warren. Khanna says Biden should recognize that Republicans are attacking Bass because they recognize she could strengthen the ticket.

Even as he continues to speak highly of Warren, Khanna told me that “Karen Bass would be extraordinary in healing our nation at this time. Her commitment to Medicare for All, racial justice, and moving beyond colonialism in Africa come from deep moral commitments. She is one of the nicest people in Congress and works well with Republicans and Democrats. She is principled but also understands the art of compromise. I believe many independents and suburban voters would be drawn to her because of her story, character, and temperament.”