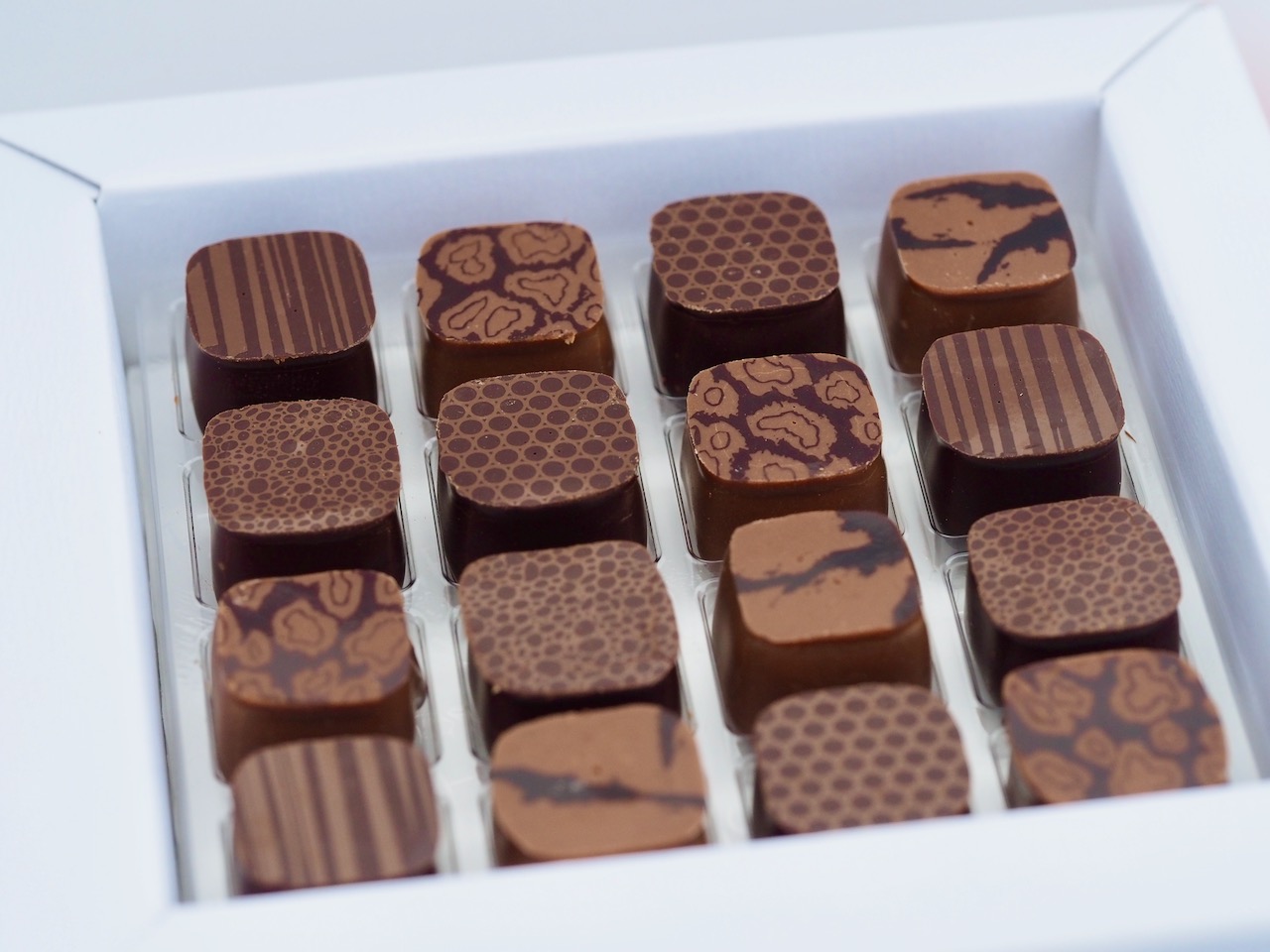 Ever since the Aztecs used it as an aphrodisiac, a gift from Quetzalcoatl, their god of wisdom, chocolate has held a special place in society, as currency, medicine and, of course, romantic temptation.

Now the global market for the most widely-consumed sweet treat in the world is expected to rise beyond 170 billion dollars within five years.

So, with ‘World Chocolate Day’ on July 7, I’ve been tantalizing my taste buds and chose these committed chocolatiers who have refined this ancient culinary craft. 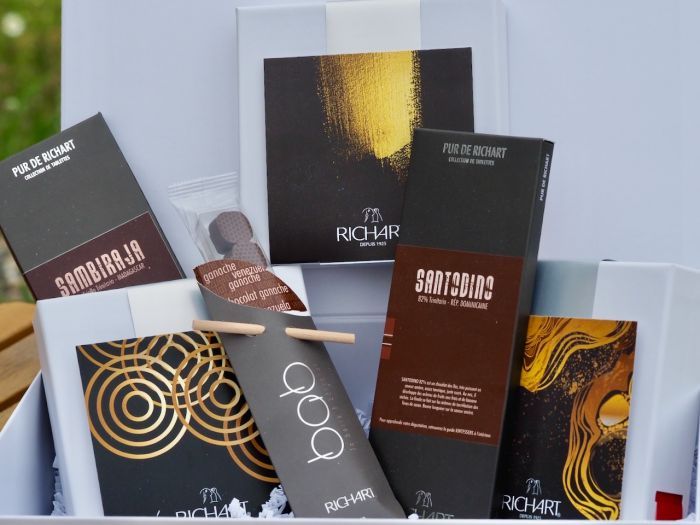 Founded in 1925, this leading French chocolatier refuses the temptation of mass production, preferring to uphold its long-held tradition of rigorous quality, with chocolate recipes developed and tested by family members.

It is no surprise it has won the country’s most prestigious confectioner’s honor, the Ruban Bleu, no less than seven times.

Criollo from Venezuela, considered one of the finest cocoa in the world, is the basis for its chocolates, with a minimum 70 percent concentration. Michel Richart, whose father Joseph established the company, said, “criollo is notoriously difficult to grow, making it both rare (5-8% of global cocoa production) and expensive, but its mild, full flavor makes it well worthwhile. You’ll taste the cocoa’s multiple personalities shining through, unburdened by excess sugar.” 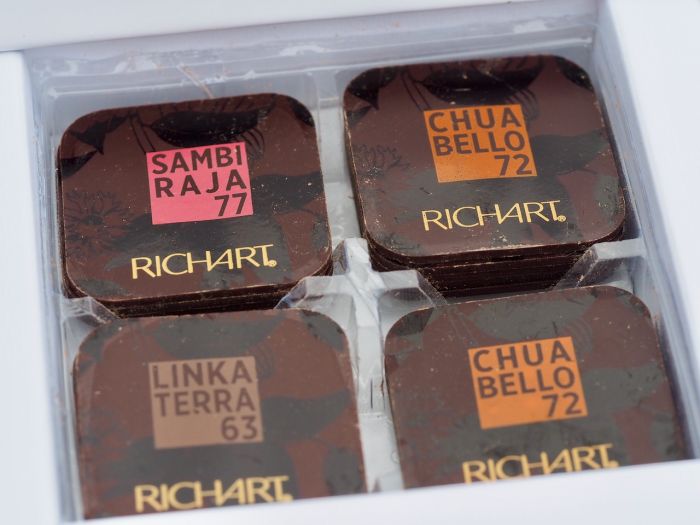 Another reason for RICHART’s success is that it grinds the cocoa finer than many chocolatiers, usually to 20 micron, sometimes 12 micron. “This ensures an ultra-smooth palate experience, completely free of sharp edges,” said Michel. “We are also one of the first chocolate makers to defend the concept of a single origin cocoa by creating a collection of plain chocolates for all tasting aesthetes.” 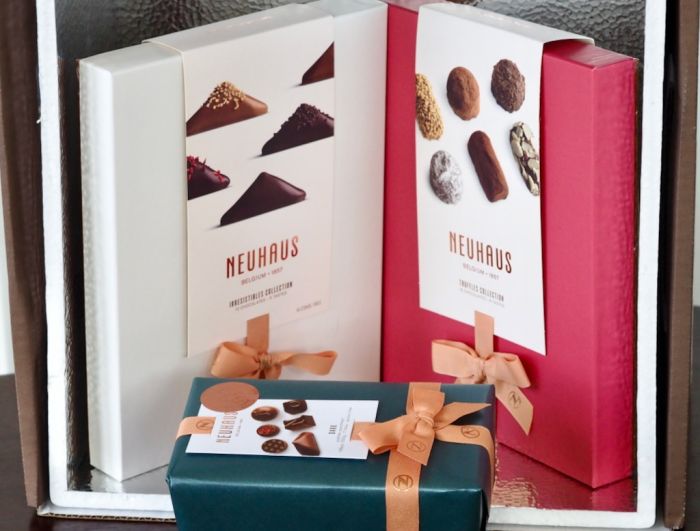 From medicine to chocolates – that sums up the career of Jean Neuhaus, founder of one of Belgium’s most venerable companies.

After opening a pharmacy in Brussels, the visionary began coating some of his medications with chocolate. Not surprisingly, that decision proved extremely popular.

After establishing the original Neuhaus Boutique in Brussels’ Galerie de la Reine in 1857, then creating the legendary praline. At the World Expo of 1958, Neuhaus introduced its iconic artisanal chocolates, ‘Caprice’ and ‘Tentation’ containing crunchy nougatine, hand-filled with smooth fresh cream or ganache, and a worldwide reputation ensued. 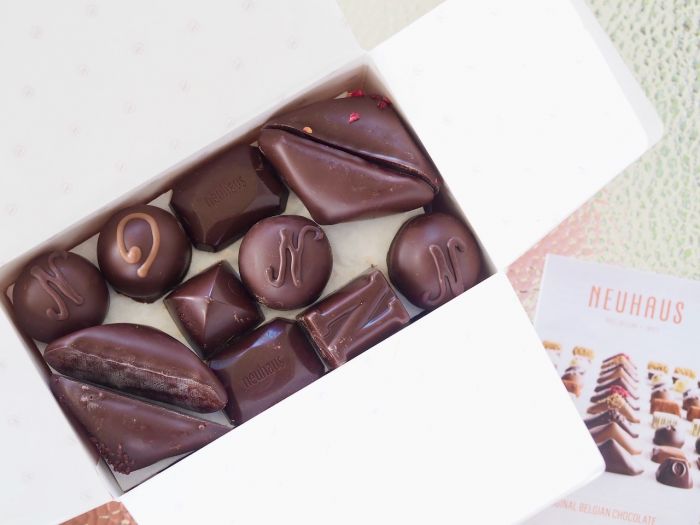 Products are presented in a ‘ballotin’ box, first created by Jean Neuhaus and his wife Louise Agostini way back in 1915. Neuhaus has expanded exponentially with most of its clients now being outside Belgium.

Neuhaus uses beans harvested mainly from its own cacao farm, and its products are palm oil free, with natural colors and flavors. For a taste sampling, try its truffle collection, with butter cream, enrobed in a thin layer of dark chocolate. Flavors include tiramisu, cognac and champagne. The aptly-named ‘irresistibles’ collection comprises chocolates filled with fresh cream or ganache. 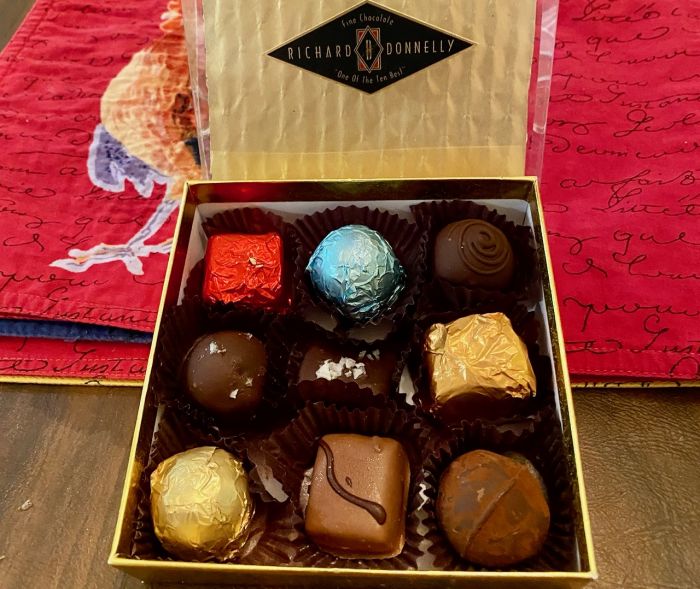 A family operation established in Santa Cruz, close to Silicon Valley in California twelve years ago, Donnelly Chocolates has won many accolades for its creations. These include being named among the top ten chocolatiers in the world by National Geographic and chosen as ‘Best Artisan Chocolate’ at the Perugia Italy EuroChocolate festival. 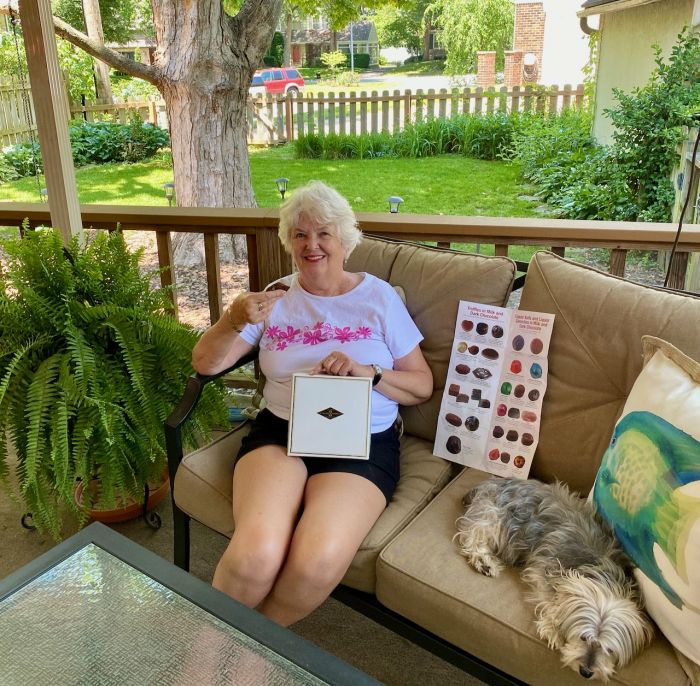 Led by Richard Donnelly, this boutique operation has two other full-time staff, including Richard’s brother, Henry, once a stock-broker who derives much more fun making chocolates than he did dealing in shares, and Maria Ramirez, as well as a part-time product developer.

Taste testers Phil and Kathy Chaney from Kansas City had these comments to make, “The liquor-filled candies were our outstanding favorite, followed closely by the caramels, which are delightfully buttery and chewy. The truffles were very artistic and simply melted in your mouth, leaving you with a single desire – ‘just one more.’ ‘ 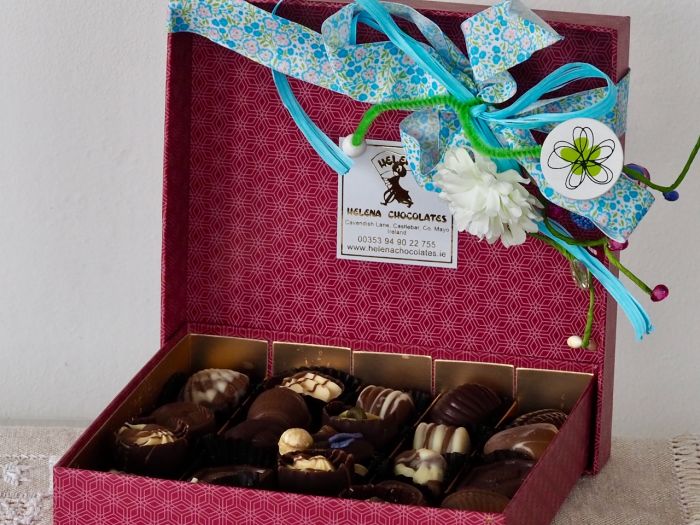 Dirk Schonkeren is an award-winning Belgian executive chef having worked in many prestigious restaurants and hotels in places such as Antwerp, Brussels, Cork and Tralee. Now he lives in Mayo in rural Ireland and has made a name for himself as a master chocolatier.

He and his wife, Elaine, opened their first Helena Chocolates shop in 1987, a pioneering move back then. “We were just about the first shop to make and sell our own chocolates, most of the others just imported directly from Belgium or the UK,” he explained. 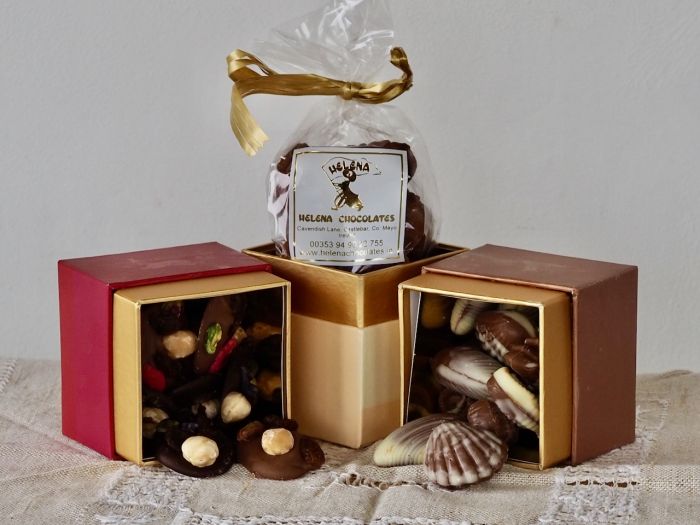 Duly recognised, Dirk was appointed ‘World Chocolate Ambassador,’ for Zurich-based Barry Callebaut, one of the world’s leading manufacturers of high-quality cocoa and chocolate. 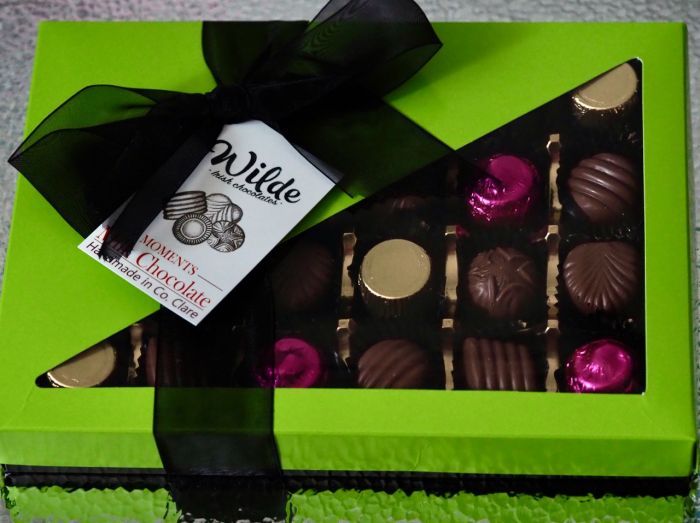 “We wanted to do something for the ‘Wild Atlantic Way,’ Ireland’s most famous tourist route, and thought you couldn’t get anything more Atlantic than seaweed,” they say. 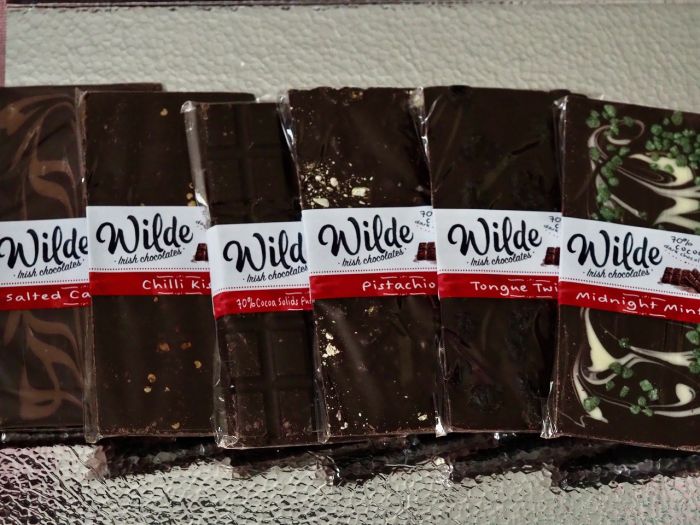 Patricia and Con set up their artisan operation under the exotic name ‘Wilde’ thirteen years ago in the village of Tuamgraney, near Lough Derg in County Clare, Ireland, and now boast exotic products such as Midnight Mint and Hazelnut Duet.

Aside from gift boxes and chocolate slices such as Rocky Road, Tiffin and Raspberry Caramel, the couple also make twenty different bars from white to super dark with 80% cocoa solids, even 99% and sugar-free ones.

Their dedication to the craft has paid dividends, with outlets in different locations, participation in food fairs and corporate events, and five international ‘Great Taste’ awards organized by the Guild of Fine Food. 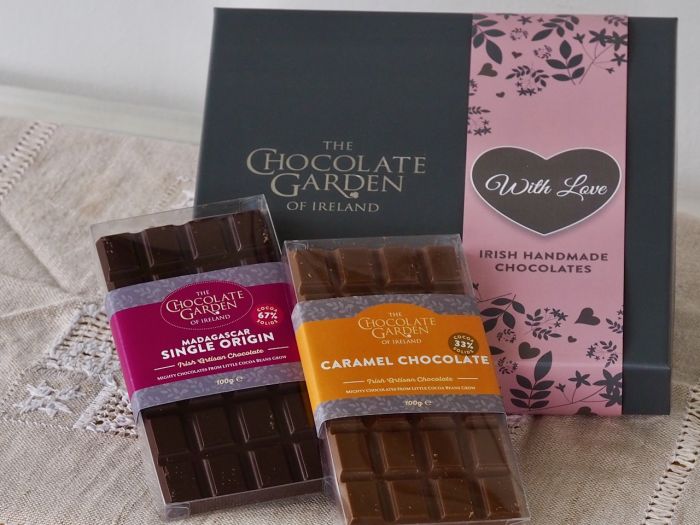 The Chocolate Garden of Ireland

Novelty items such as gardening, hairdressing and tool sets made from chocolate, are among the esoteric products created by husband and wife team Jim and Mary Healy.

Established almost 20 years ago amidst rolling hills on the Wicklow-Carlow border in Ireland, their company has extended both distribution and products.

Based in picturesque countryside, the couple started making their own chocolates from 2003 and focus on sustainability and reduction of carbon footprint, using only natural flavorings containing no palm oil, GMO ingredients or artificial sweeteners.