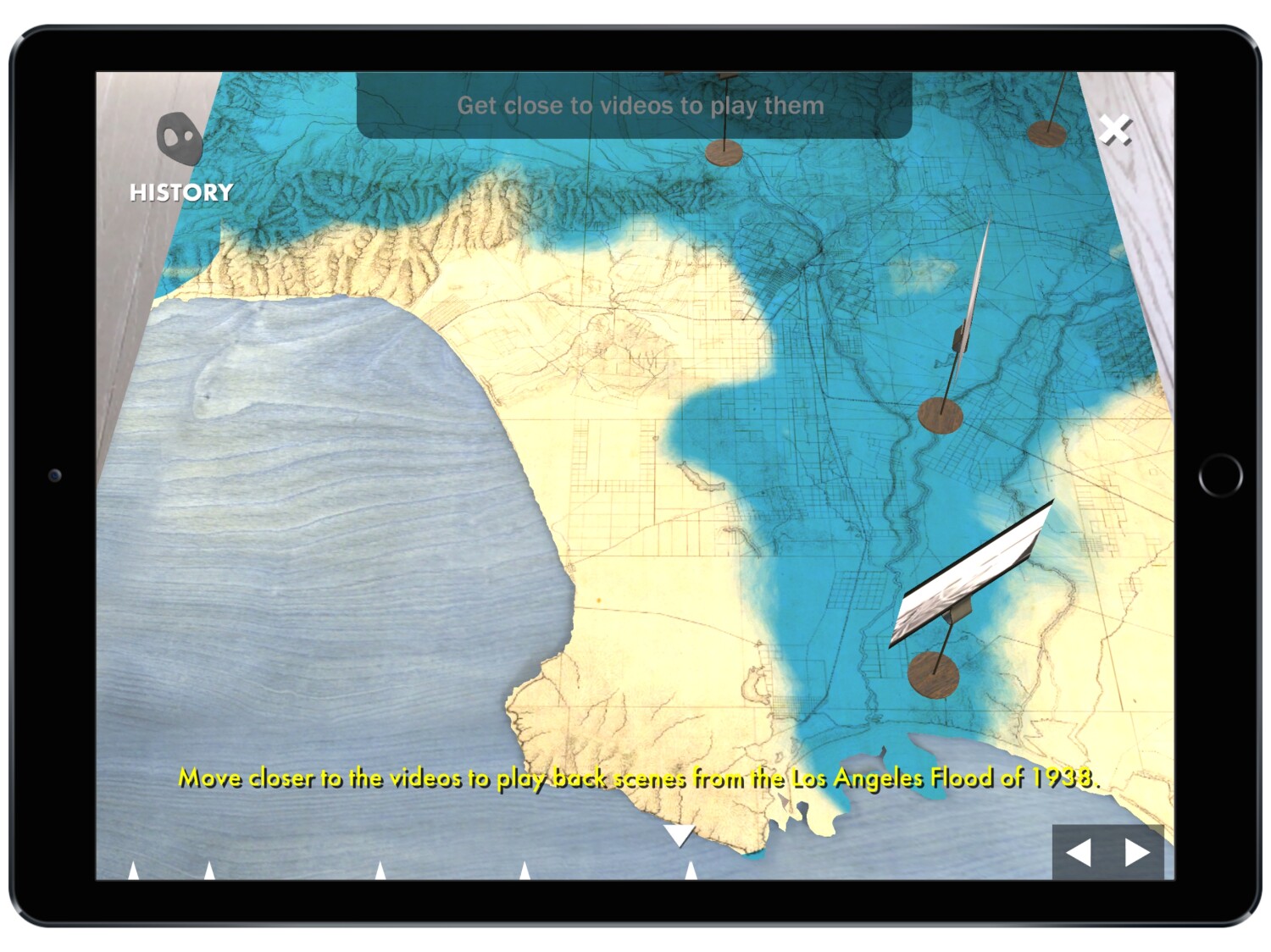 Fifty-one miles of territory. Thousands of years of evolution. How to grasp the complexity of the Los Angeles River, its history and its geological diversity in a single sitting?

Well, there’s an app for that.

“Rio de Los Angeles” is a new augmented reality app produced by RYOT, a production studio run by Verizon Media that specializes in interactive and immersive experiences, in collaboration with digital studios Vrai Pictures and Superbright.

The app is an interactive experience for iPhone and iPad that walks a viewer through some of the river’s history from the pre-historic era to the present. Point it at a flat surface, and a 3-D map of the Los Angeles Basin materializes on the screen. From there, a menu of options walks you through the river’s history, from the shifting waterway on a broad flood plain to the channelized water body encased in concrete.

With the touch of a finger, the viewer can make rain fall or access vintage video of historic Los Angeles floods — including the deadly flood of 1938 that killed dozens of people, inundated roads and washed away homes and bridges. That flood’s ferocity led the city to implement measures such as channelization — hence today’s apocalyptic river in a concrete chute.

Jessica Brillhart, founder of Vrai Pictures, a studio that has worked on virtual reality projects in the cultural arena — including a cosmic visualization of Beethoven’s Fifth Symphony with London’s Philharmonia Orchestra — says she was intrigued by the story of the L.A. River after paying a visit to architect Frank Gehry’s studio and learning about his firm’s work on the river master plan.

“These mediums have the potential to show data sets in a whole new ways,” she says of augmented reality. “As an augmented reality project you could understand the river on so many different levels.”

The app was built using data from a variety of sources, including historic archives and the LA River Index, a research database assembled by River LA, one of the many groups involved in the planned redevelopment of the river.

Jake Sally, head of development at RYOT, which focuses on creating immersive content, saw an educational opportunity in the project — taking assembled information but finding a fresh way to present it.

“The L.A. River is amazing, but it’s also hundreds of pages and graphs and data sets, and they are not accessible,” he says. “So can we build a depth of understanding? … How can people who are in the immediate proximity to the river have a greater understanding of how their small piece fits into the larger context?”

The app, which is free, also helps make augmented reality experiences accessible to the everyday user; all you need is your phone.

“It’s about how do we democratize these new technologies?” says Sally. “How can we create these one-of-a-kind experiences that connect the digital and physical worlds?”

“Rio de Los Angeles” had a soft launch earlier this month and is available for download on the Apple app store.