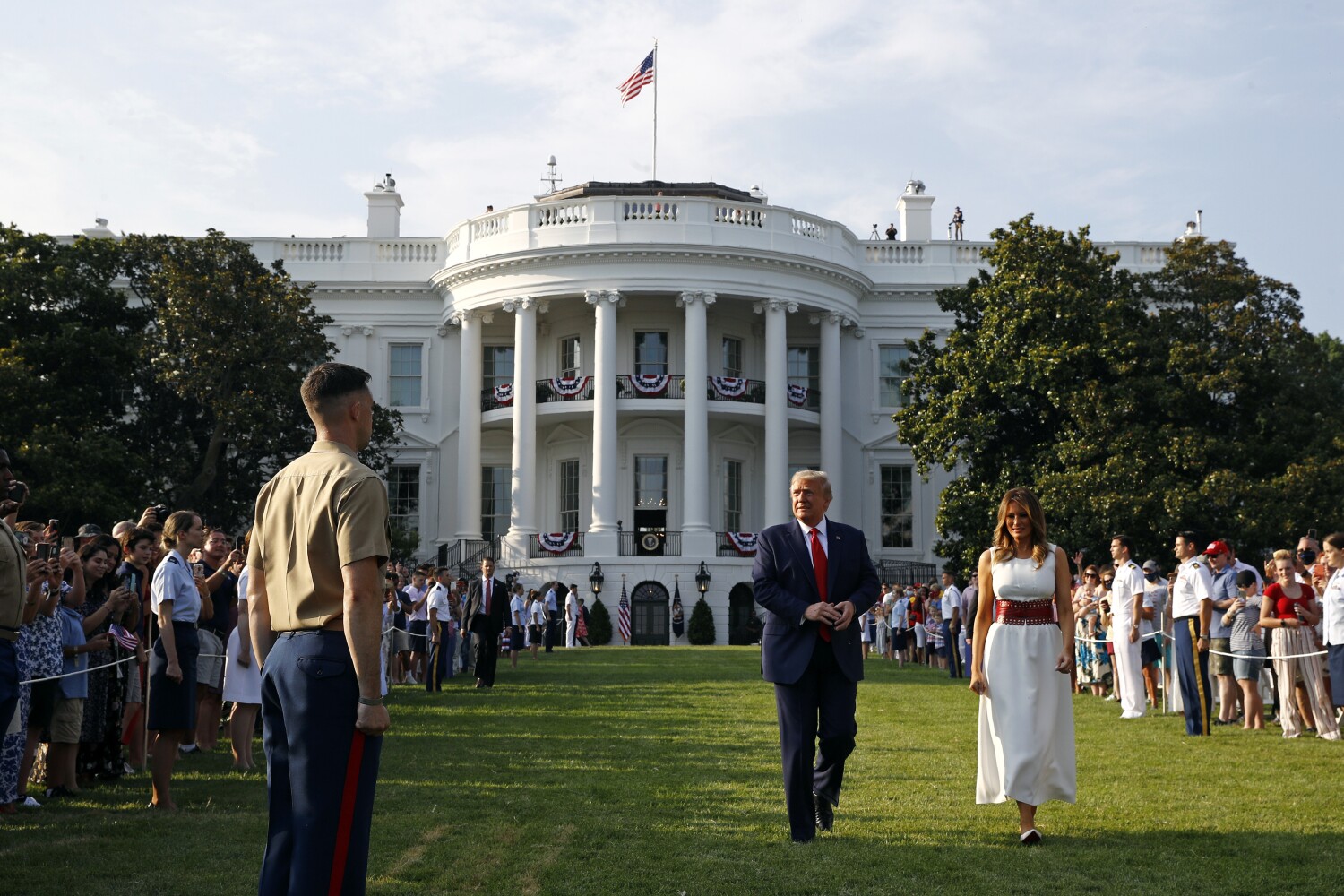 White House surrogates and GOP lawmakers struggled Sunday to defend President Trump after he spent the Fourth of July holiday weekend denigrating the racial-justice movement galvanized by George Floyd’s killing and playing down a deadly pandemic by claiming that 99% of coronavirus cases are “completely harmless.”

In a pair of divisive speeches delivered against backdrops meant to invoke traditional images of patriotism and national pride — the massive presidential monument at Mt. Rushmore in South Dakota on Friday and a fireworks-and-flyover celebration in the nation’s capital the next day — Trump hewed to a message aimed at his hard-line base, with little in the way of outreach to the country as a whole.

Even some Trump strategists acknowledge it’s a risky gambit.

At a time when multiple opinion polls show the president trailing his presumptive Democratic opponent, former Vice President Joe Biden, by double-digit margins, Trump is diverging ever more sharply from mainstream voters’ views on race, justice and history as well as how to cope with a raging pandemic.

Among those who work for Trump or hope to ride his election coattails, however, avoiding criticism of him even in the face of false or ahistorical statements remains a seemingly mandatory practice.

Infectious disease specialists say about one-third of coronavirus cases are asymptomatic. But for many others who contract it, the effects can be serious or catastrophic. Even those who survive the illness often face dangerous, long-term health problems.

“I’m not going to get into who’s right and who’s wrong,” Hahn said during an interview on CNN’s “State of the Union.” He acknowledged that “cases are surging in the country” and urged Americans to follow CDC guidelines on mask wearing, physical distancing and hand washing.

On ABC’s “This Week,” Hahn deflected when asked how many cases he believed were harmless, replying: “Any case, we don’t want to have … and any death, any case is tragic.”

Hahn also declined to address Trump’s often-made statement, repeated last week in an interview on Fox, that the virus would “sort of just disappear, I hope.”

Those with similar credentials, but unbeholden to Trump, were more forthright.

Hahn’s predecessor at FDA, Scott Gottlieb, who headed the agency for the first two years of Trump’s tenure, said he did not know where Trump had gotten the 99% statistic, but that it was incorrect.

“Certainly more than 1% of people get serious illness from this,” he said on CBS’ “Face the Nation.”

Gottlieb said the current surge of new infections would soon begin yielding more deaths despite the fact that younger people made up a greater share of newly uncovered cases and that treatments had improved.

“We’re going to see deaths creep up,” he said on CBS. “You’re going to have more deaths, tragically.”

Trump has consistently touted his own performance in confronting the pandemic, and Republican lawmakers — especially those up for reelection this year — are increasingly being put on the spot as to whether they agree.

On CNN’s “State of the Union,” one of the Republican incumbents facing a tight race, Sen. Joni Ernst of Iowa, was asked whether Trump was exhibiting “failed leadership” in the coronavirus crisis.

“No,” she said. “I think that the president is stepping forward.”

Trump’s speech Friday at Mt. Rushmore, and his Fourth of July remarks the next day in Washington, appeared aimed at stoking culture wars stemming from the George Floyd protests, including the drive to take down statues of Confederate-era figures.

In his Washington speech, the president declared that the largely peaceful protesters who rallied for weeks in cities across America were “not interested in justice or healing.”

“We will never allow an angry mob to tear down our statues, erase our history, indoctrinate our children, or trample on our freedoms,” Trump said.

Sen. Tammy Duckworth of Illinois, a potential Democratic vice presidential nominee, said the president’s takeaway on weeks of protests flew in the face of broad public support for the aims of the Black Lives Matter movement and a reevaluation of public monuments to the Confederacy.

Duckworth, a military veteran who lost both her legs while serving in Iraq, said Trump’s emphasis was particularly jarring against the backdrop of the pandemic and White House inaction in the face of intelligence assessments that Russia offered bounties to militants in Afghanistan for killing U.S. troops.

“He spent more time worried about honoring dead Confederates than he did talking about the lives of our American — 130,000 Americans — who lost their lives to COVID-19, or by warning Russia off of the bounty they’re putting on Americans’ heads,” Duckworth said on “State of the Union.”

“I mean, his priorities are all wrong here.”

Even some Republican appeared to be edging away from Trump on the full-throated defense of honors for those military figures who took up arms against the United States to defend slavery.

Ernst, also a military veteran, was asked about the president’s threat to veto a military-spending bill if it includes a proposal for a process to weigh renaming U.S. military bases that bear the names of Confederate generals.

She said she thought he should sign the measure.